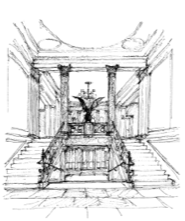 THE CENTURY ASSOCIATION was formed in 1847 at a meeting of the Sketch Club, a group of artists and writers, and took its name from the number of men who were invited to join it. Like many youths, the Century made its home in a variety of odd places around the city until it finally settled down, on January 10, 1891, in its present Renaissance-style building, designed by the firm of McKim, Mead & White (all three architects were members). Despite some recent renovations and additions, the building and its contents to all appearances have changed relatively little since 1891; much of the present furniture was originally bought for the building, some of it designed specifically for the building by the architectural firm. The clubhouse is decorated with works from a house art collection that is largely made up of contributions by its artist members. In 1997, The Century Association Archives Foundation was established to preserve, organize, and administer the historical records of the Association by seeking to make these records available to serious scholars and researchers. The 7 West 43rd Street Foundation is likewise dedicated to the restoration and preservation of the clubhouse’s historic façade. Both are 501(c)(3) tax-exempt organizations operating in the public interest.